This EPA/Dimock article from the Los Angeles Times is going to get a lot of traction over the next few days.
This quote within the article should get even more:

"The EPA PowerPoint presentation identified five wells contaminated with methane whose chemical fingerprint, or isotopic composition, was the same as methane from the Marcellus shale formation at the center of Pennsylvania's natural gas boom."
Thanks to all who forwarded the same to me.

As many visitors know, there was - and continues to be - a major methane belch-a-thon going on in northeastern PA. When it was first brought to my attention last May, I created this post which is by far, to this day, the #1 most visited post on this blog since I switched to blogger in February 2010.

And as soon as I could, I drove 3+ hours to see things for myself. 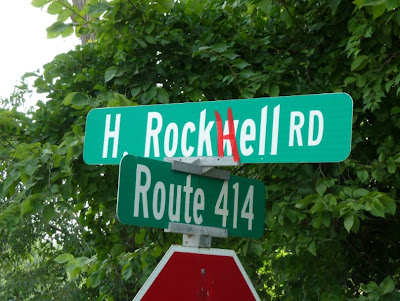 And then, as usual, I decided to get up close and personal.


Leroy PA: The Earth is Moving Where it Shouldn't from Don Williams on Vimeo.


And once I saw all of the above, I helped fund this report to document the science about the massive methane emissions taking place across three counties in northeastern PA.

And here we are, over a year later, and we're reading that the EPA has authored a recently-obtained ( thanks, LA Times! ) PowerPoint presentation that states the isotopic signature of methane in contaminated wells in Dimock, PA is the same as that of the methane being fracked out of the Marcellus Shale formation thousands of feet below.

And yet we have the TribLive, which by the way appears to have removed my comment even though I confirmed it was successfully posted,  stating there is an impervious cap layer above the Marcellus Shale - and further - that "Marcellus shale natural gas drilling is unlikely to contaminate water wells..." 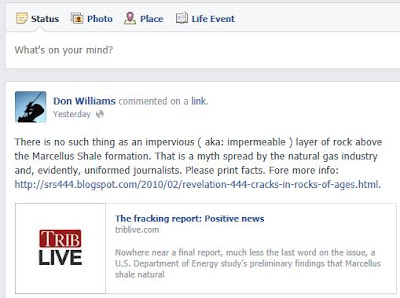 Seems we have some contradictory data out there...n'est-ce pas?

Eventually, sooner or later, a whistle-blower from within the natural gas industry will emerge.

I await the day.


Flaming Hotspot in the Woods - Leroy Township on 7/22/2012 from Don Williams on Vimeo.